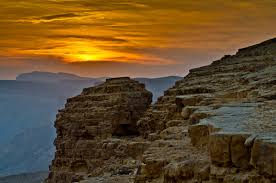 I shuddered at the thought of venomous vipers, as snakes were called. But darkness had long since fallen and I could no longer put off finding a place to sleep. The youth hostel was full, my fair weather English friends were sleeping on the beach, and I’d finally given up on finding my road partner Mordechai. I was truly on my own now. With a mix of relief, guilt, dread, and excitement, I shouldered my pack and began walking in the direction of the abandoned kibbutz described by the boy at the café. The desert had turned suddenly very cold, and the wind whipped through my thin sweatshirt. Before long, Eilat’s few streetlights disappeared, leaving only the half-moon as my guide.

After a while, I made out some adobe buildings. The half-demolished barns and bungalows had the look of an abandoned settlement all right. Following the sound of something dripping, I discovered an old shower pipe protruding from a bathroom wall. Its ruined ceiling gaped open to the sky. Droplets glistened in the beam of my flashlight. To my amazement, when I turned the shower knob, water gushed out like Moses striking the rock! The temptation to wash away the salt and grime of the day was too much to resist, so with the moon as my only witness, I stripped naked and let the cool stream pound over my hair and skin like a waterfall. Wet sand oozed up through the cracked ceramic tiles beneath my feet but I didn’t care as long as it wasn’t a viper. Shivering, I let the breeze dry me off. Even my dirty clothes felt cleaner now. Now, if only I could find a safe spot to sleep. But was I the only hitchhiker seeking sanctuary in this abandoned kibbutz?

This site uses Akismet to reduce spam. Learn how your comment data is processed.