Excerpt from "Newcomers in an Ancient Land"

SUNRISE OVER THE GOLAN

I crept along a dirt road under a black dome studded with stars on my way to my job as a volunteer in the vineyards of Kibbutz Dan. At four in the morning, only the chirping of crickets and the crunch of my work boots broke the peace along this deserted stretch of the pre-1967 border between Israel and Syria. Until the rest of the work crew arrived at six I would be alone. Or would I?

DANGER, EXPLOSIVES, KEEP OUT warned the faded signs in Hebrew, English and Arabic on a haphazard barricade of rusty barbed wire, broken concrete, thorn trees and weeds. From just beyond, I could hear a faint braying and catch a glimpse of something white and flowing. A parachute? My heart pounded and my red hair stood on end as adrenalin surged through every cell in my eighteen-year-old body. But on closer inspection, it was only the billowing jellaba of a Syrian farmer tilling his fields with a hand-held plow drawn by a recalcitrant donkey. Such a biblical vision made it hard to imagine that conflict still wracked this ancient land.

One by one, the stars winked out, the sky turned pale, and a rosy glow backlit the massive shoulders of the Syrian hills hunched over the valley. I knew those silhouetted hills hid bunkers; and in those bunkers crouched soldiers; and in the cross-hairs of their Kalashnikovs I could be a target. Yet for a moment, a wild part of me dared imagine the sight of a naïve young girl in khaki shorts and shirt might offer a welcome distraction from the tedium of war.

By now opalescent clouds of apricot, lavender and magenta were gathering at fever speed. Just when it seemed the light could get no brighter, a blinding fire-ball burst over the mountains. Quaking in my boots, yet quivering with delight, I stood transfixed by the beauty and danger of this ancient land where I was now a newcomer.

Pre-order this book from these sources:

The Magic of Memoir is a memoirist’s companion for when the going gets tough. Editors Linda Joy Myers and Brooke Warner have taught and coached hundreds of memoirists to the completion of their memoirs, and they know that the journey is fraught with belittling messages from both the inner critic and naysayers, voices that make it hard to stay on course with the writing and completion of a book.  Paula Wagner is one of 40 contributors in this book published on November 2016. 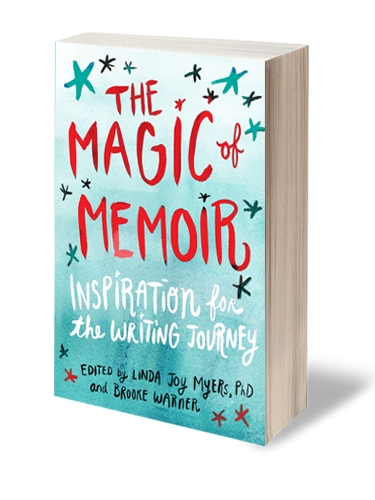